The 2016 National League will take place over the three dates, June 12th, July 17th with the final on August 7th. Following last years strong performance which saw the Kildare County female team reach the premier division final and the male team showing great promise with a very competitive performance in round 2 also in the premier division. We are confident that the County can put forward two strong teams in both rounds to build on the solid platform established last year. Athletes from all clubs are invited to put their name forward for selection by informing their coach that they would like to be considered. Performance in this year’s County T&F Championship will be a consideration in the team selection process. This is a fabulous opportunity for Kildare athletes to compete against Ireland’s top athletes and gain some valuable experience in national competition. Eligibility for most T&F events in the league is from U17 and can therefore provide a great development opportunity if selected.

This Sunday, 2nd. August 2015, will see the Kildare Athletics Women’s team contest the National League final in Tullamore. The team is essentially the group of athletes who have performed strongly in both the qualifying rounds and earned themselves a place in the top eight for the final of the premier div. This is the second year in succession that the team has made the finals and we wish them the very best of luck as they endeavor to equal, or better perhaps, the 3rd place finish in last year’s final. The team sheet can be seen below. All support for our county athletes will be greatly appreciated on Sunday.

The second round of the National League will take place this coming Sunday, 19th July 2015, at Morton Stadium and will see both the county men’s and women’s team compete for a place in the final of the premier division in their respective leagues. The provisional list for both teams are attached below but subject to final confirmation by Sunday morning. This round is local and all support for our county athletes will help and be appreciated as they chase places in the final.

Weekend athletics
St Cocas Paul Robinson was in action in Tampere in Finland at the European U23 Championships last week and it shows how far up the rankings he has come when he finished 4th in the 1500m final. After cruising through the heats on Saturday morning Paul had every reason to be confident going into Sunday afternoons final. He had been posting great results and improving his PB over the distance all season and had left no stone unturned in his preparation for this event.  On the starting line with Paul were a number of other potential medalists and a great race was in prospect. After a slowish first lap the field was still bunched up and as they passed the 800m mark in just about 2.05 a fast finish was expected. Throughout the race Paul covered all the moves made by the other athletes and as they took the bell he was looking good in about 3rd place. Down the back straight the Belgian athlete who was favourite for the event struck for home and he was followed by the english athlete. All the while Paul looked like he was lining up to make his strike for gold but as they entered the home straight as Paul tried to make the move the pain was etched on his face as the fast finishing Frenchman just passed him out for the bronze medal. It was heartbreak for Paul but a fantastic display for the Kildare clubman. He was immediately distraught but received great support from his coach, his Irish team members and manager and of course his family who had travelled with him.  A tweet by Sonia O’Sullivan summed up the mood after the race @PaulRob91 ps. Few good runners been 4th before not the end….just the beginning. 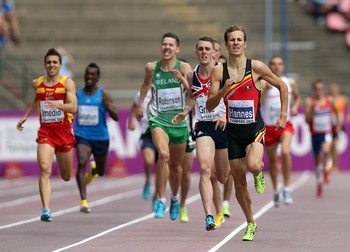 Meanwhile closer to home the two Kildare senior athletic teams were in action in Sligo at round 2 of the national league with qualification for the final the main aim. Going into the event the women were sitting nicely in 2nd place but knew that a good performance was needed  by the team to secure the place. They were also in the premier division which included such heavyweights as DSD, Clonliffe Harriers, Ferrybank and Leevale. The young team really stepped up to the mark comfortably making the final after some stunning performances. Sandra Lawler got the ball running with an emphatic win in the hurdles and was followed a few minutes later by Sinead Burke who was equally impressive in the walk. Rachael Smyth smashed her PB in the 1500m to take 2nd place and Suzanne Quinn also 2nd in the 3k.  Kathryn Weir 2nd in the discus and 3rd in the shot and Pauline Kenny 2nd hammer. Emer McCabe in the triple jump and 400m hurdles, Niamh Field in the 400m and Ciara Gallagher in the 200m all scored valuable points and multi eventer Vivien Fleischer scored in the high jump and the 100m. Field events were covered by Eileen Woods Long Jump and Elaine Corrigan the javelin and Vicky Kyne and Michelle O’Dea for the relays the team have easily qualified for the final in mid August.

The men’s team had a tougher assignment as they were in sixth place coming into Sunday with only the top 8 to qualify. They were competing in division 1.  They had one trump card in the form of David McCarthy former international athlete and he certainly got the team off to a great start with wins in the 400m hurdles, the 400m, the 4×100 and 4×400 and 2nd in the triple jump. In fact it was wins all round for the team which apart from David has an average age of about 18 and shows a depth of talent in the county. Nathan Murphy in the Walk, Kevin Kelly 1500m, Martin Horan 3k s/c, Radek Tyburezy and Anthony Fasole and Conor Bracken Price in the Sprints and relays, Michael Kenny and his father Mick in the throws, Ikenna Jacob Long Jump and Neil Halsted in the High Jump. The team was completed by Michael Jordan who had a PB using the senior javelin and Sean Flanagan and Conor Murphy. Eleven wins in 15 events saw the team top the group and make the final easily in 2nd place overall. Great work by everyone over the past weeks and the focus now will be on the national final in Tullamore on August 18th.